This section provides a brief overview the cryptographic identities and protocols used by the ARK blockchain.

The following examples will be using test-fixtures from the ARK Core repo on GitHub. 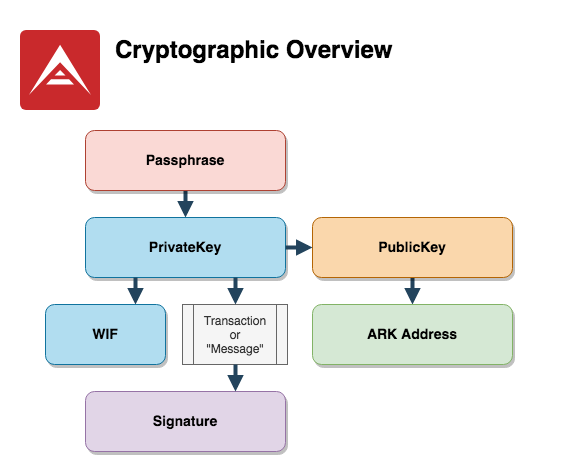 The passphrase is the master password (key) for your ARK tokens. Every ARK address has its own unique passphrase. With the passphrase you can sign transactions to send your ARK or vote for a delegate.

Do not lose it, and do not share it with others, or you could lose access to your ARK tokens. If you lose your passphrase, or if it is stolen, there is nothing we can do to help you. We CANNOT recover any lost passphrases.

A passphrase is a "key to the castle." It is used to directly calculate the PrivateKey of an ARK account and should never be shared, stored irresponsibly, or transmitted over the internet. The only person that should ever have access to a passphrase is the owner of its account.

We can technically use any word, phrase, or string as a passphrase which will result in a valid ARK Address or Wallet; however, it is heavily discouraged as the security of an address relies on the randomness of its Passphrase. Humans are bad at creating randomness, and entering sequences of random letters and numbers isn't easy to do accurately.

To promote usability while also maintaining security, ARK passphrases are implemented using the BIP39 Protocol. Simply, it's a mnemonic sentence constructed via randomly chosen words from a large wordlist. From here, that sentence or "Passphrase" is piped through a series of hashing, curve, and encoding algorithms to derive a PrivateKey / WIF, a PublicKey, and subsequently Addresses / Wallets and Signatures.

To learn more about randomness, visit the Wiki's on Randomness and Random Number Generation 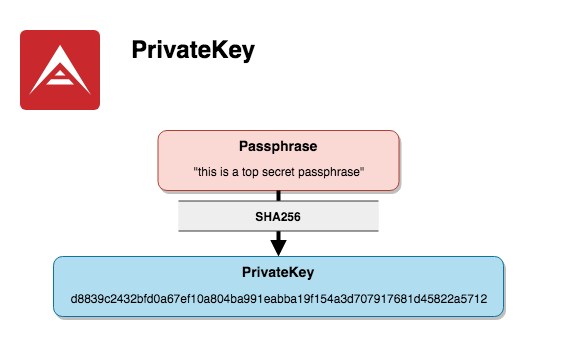 A PrivateKey is a 256-bit integer represented by a 32-byte Hex-encoded string of 64 characters obtained via SHA256 hashing of a Passphrase.

To understand the significance of this large number, consider the following:

The DEC representation is the "base 10" interpretation of our PrivateKey and gives us a little insight into the size of the numbers we're dealing with "under the hood". This large integer is also referred to as a "BigNumber" or UINT256. 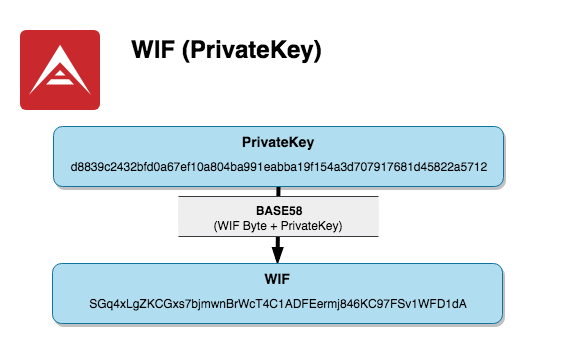 WIF stands for "Wallet Import Format", and is a BASE58-encoded PrivateKey prepended by a network prefix-byte (0xaa for ARK Mainnet & Devnet).

It's essentially a more useable/human-readable PrivateKey and should be treated with the same diligence with regards to storage and security. 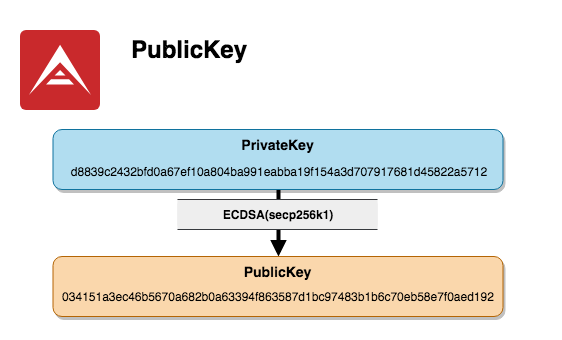 A PublicKey is like an ID or Passport. It is a mathematical proof of identity and is derived from a PrivateKey via ECDSA and SECP256K1 computation. 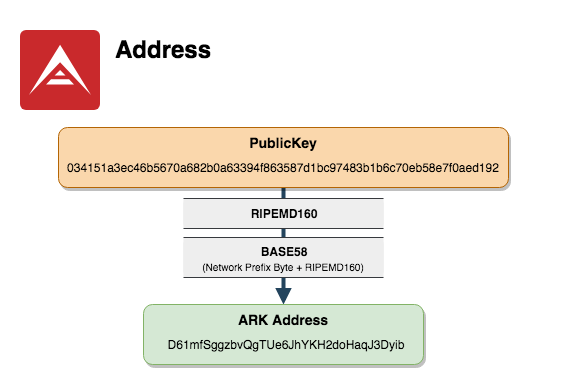 An ARK address is shareable much like an e-mail address. It is the destination to which ARK tokens can be sent, and is obtained from a PublicKey via a combination of RIPEMD160 hashing and Base58Check encoding prefixed by a single network byte.

Since an address is derived from a PublicKey, that means it is also mathematically tied to a PrivateKey and Passphrase.

The following is a full prefix-byte table for custom Address construction and is provided for informational purposes. While this would not be used for ARK Mainnet or Devnet, it CAN be used for custom networks. 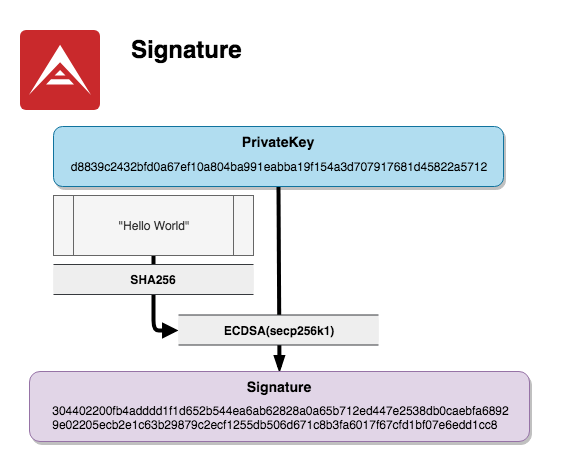 A Signature is essentially proof that a message or transaction was "signed" by a particular PrivateKey / Passphrase.

Remember that this same PrivateKey also has a matching PublicKey. That means a Signature is computationally linked to its corresponding PublicKey using ECDSA and SECP256K1 standards.

ECDSA is a "Digital Signature Algorithm" variant based on and "Modular Arithmetic".

It is a standard to sign and verify transactions/messages and Signatures using Elliptical Curve Cryptography.

SECP256K1 defines the set of ECDSA parameters used to produce output "deterministically", meaning the same input will always result in the same output. Additionally, no two inputs will ever produce the same output; It is also hard to reverse. This is known as the Discrete Logarithm Problem and is the basis for Curve Cryptography.

Can the reader say what two numbers multiplied together will produce the number 8616460799? I think it unlikely that anyone but myself will ever know. 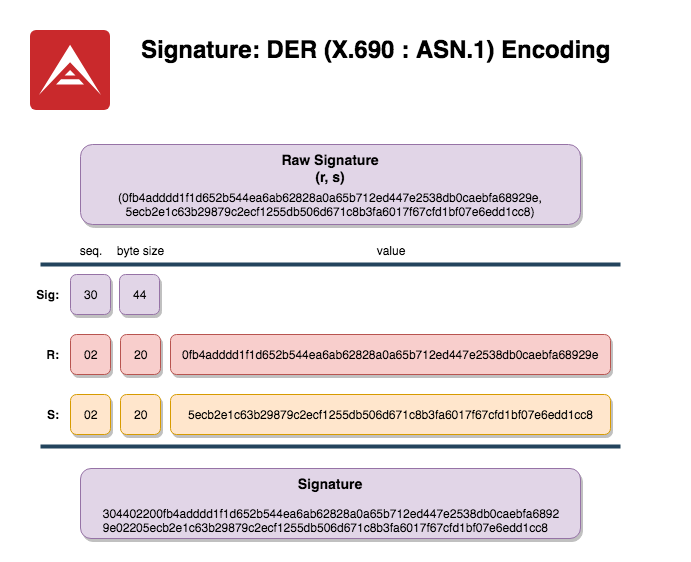 Upon obtaining a Signature from the ECDSA/SECP256K1 algorithm, it will first be in its raw form known as an "r" and "s" value.

This means that the length of the "r" and "s" values is 64-bytes. The (r,s) section identifiers and their sizes occupy a total of 4-bytes.

The very first byte of an encoded signature is the sequence identifier 30.

To encode the (r, s) values, we place 30 as the leading byte, followed by the total signature length (0x44 in this example).

Base58Check encoding is used to produce human readable/typeable text from a hash.

It is used to encode a PrivateKey and is also the final step to encoding an ARK address.

RIPEMD160 is a subset of the RIPEMD family of cryptographic hash functions.

As its name suggests, RIPEMD160 hashes are 160-bits in length.

SHA256 is a subset of the SHA-2 family of cryptographic hash functions.